Tiger Shark is named for its dark tiger like stripes in childhood. They are from the family ‘Carcharhinidae’. They are less massive than the White Sharks but not less important. As they were involved in some accidents with humans, they are now well known among us. They are the second most caught shark among all shark species for being a source of Vitamin. They influence the sea and even the mythologies of land living people. 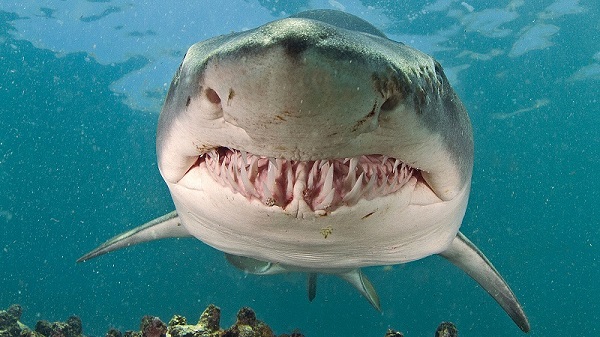 For their great influence the tiger shark fats are now very knowledgeable and interesting to all.
And we are with you to show the most amazing facts of Tiger Shark. Here are those, and you will sure to amaze reading these facts.

1. One of the largest shark species.
They are they one of the largest species of shark planet. They are about 10 to 16 feet long and 800 to 1500 pound in weight on average size. The largest one can be bigger than 20 feet and like as heavy as a horse.

2. Female bigger than male.
The interesting fact of tiger shark is that the female shark is always bigger than the male one. The female have to carry their child shark. You can easily recognize the male and female species.

3. Meaning of their name.
Why they are called tiger shark? Because after born they have the tiger like stripes covering the body. These sign is acute in sharks that are below 5 feet in size. But after being old they lost these black stripes.

4. Similarity with Tigers.
Water living Tiger shark has some similarity with land living tiger that both of them are an excellent hunter. They can hunt at a great speed. This fact of tiger shark takes it on the top list of Hunter. They have also tiger like skin in childhood. That’s why they are called ‘Sea Tiger’.

5. Unique eating habit.
The funniest fact of Tiger Shark is that they eat whatever they get in front of them. They are unique in the world for their eating habit. People find a lot of strange things in their stomach such as jewelry, broken pieces of boats and ships, cloths, books, and so on.

7. Sense of smell and strong eyesight.
According to the consideration of smelling capacity and vision, you may take tiger shark in your top list. It is said that they can smell far behind from a prey. You may call these as the sixth sense of a tiger shark. This helps it to hunt a prey easily.
8. Especial sense to electric impulse.
You will be surprised that Tiger Shark can even feel electric impulse. The special pores around the shark’s snout are filled with jelly like substances that helps them to fell the impulse. Finding the direction of the impulse they can find the prey.

9. Special teeth structure.
Tiger Shark has strong teeth as every shark has. But the difference is in their unique structure. You can’t tell them only sharp. The structure of those teeth is like a sail of boat or like a part of Opera house. They can cut even a turtle using those teeth.

11. Long average lifespan.
Shark has a long lifespan; even sometime it is bigger than a man. The average lifespan is near to 30 to 40 years. It sometimes may more than 50 years. But 20 to 30 year aged shark is available in sea.

12. Human Vs Tiger Shark.
Tiger Shark is considered as the second most dangerous shark for human. As like great white shark which is the most dangerous for human, it’s not always attack the human species. Fighting between tiger shark and human is rear.

13. Reproduction of Tiger Shark.
Pregnancy of tiger shark tends near 16 months. The new born child is about 15 to 70 centimeter long. Female sharks can give a birth after every three years. Tiger Shark is the only species which so not bear their child on placenta.

14. They love warm water.
Tiger Shark is very fond of warm water. Almost always they remain near to the surface water. You will find them near the coastal area. They travel up to 40 kilometer on average in a day for searching prey.

15. Hardly detectable in sea.
Are you going to find a tiger shark in sea? But you may not find them easily. They are very cleaver to hide them in sea. Because of slow swim and natural color they are not easily detectable to human and even to the prey.

16. Tiger Sharks current existence.
Nowadays tiger sharks are frequently killed by human. Because of low reproduction rate their existence is now on trouble. They are found in shallow water and it is easy to hunt them if you can detect them once.

17. Range of food list.
As mentioned above tiger facts that they eat whatever they get in front of them. Besides non living things there is an interesting fact that they use to eat living things too. In Hawaii cost sharks are founded eating goats, dogs, rats, cats, sheep and even horses.

19. Presence in the ocean.
Tiger Shark is the fourth largest shark in the world. They are frequently founded in warm water, in Atlantic Ocean and coast of Hawaii. They are also available in New Zealand and Japan sea coast.

21. Swimming efficacy.
Tiger Shark always swims very slowly. The prey can’t recognize the shark is present near it. As the shark comes closer it burst its speed to catch the prey.